Shigaraki Pottery Village (Japanese: Shigaraki Togeimura) is located in Shigaraki in Shiga Prefecture. It has a unique cafe called Climbing Kiln Cafe (Japanese: Noborigama Cafe), and you can actually go into a kiln and have coffee and cake there. According to its homepage, the climbing kiln cafe is the only thing in the world (as of March 2018). How interesting!

I went to Shigaraki Pottery Village in March 2018. When I arrived there, I was welcomed by a great number of tanuki (raccoon dogs). The Shigaraki area is famous for its pottery, especially tanuki pottery like them. It was fun to look for funny or cute one. 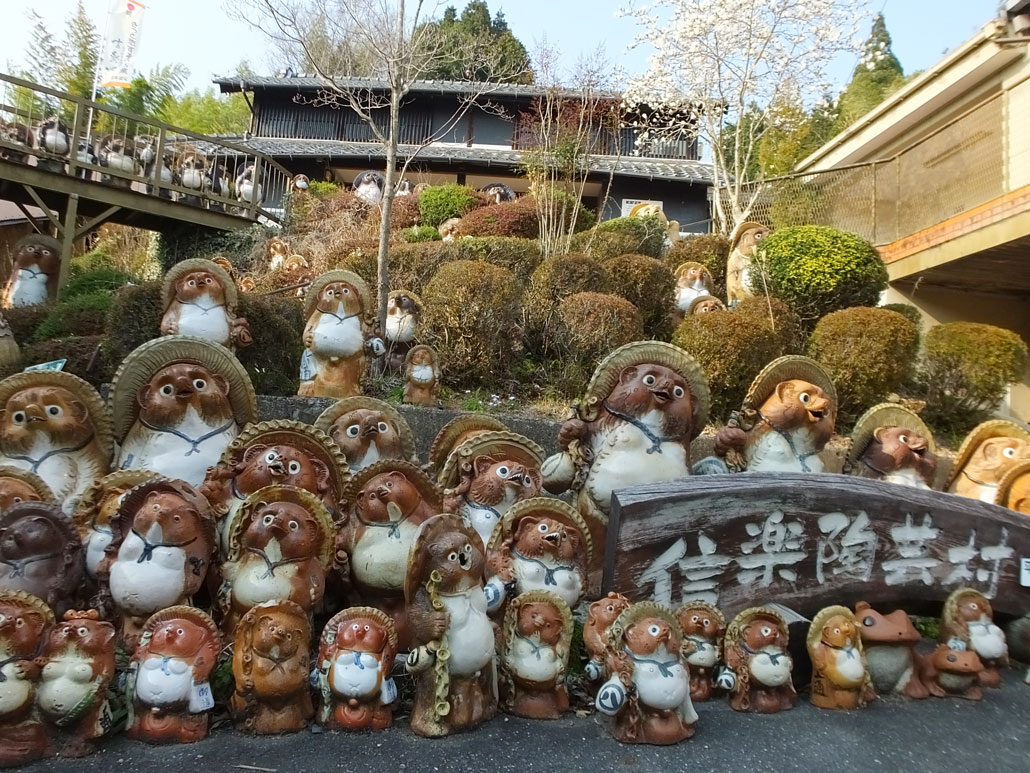 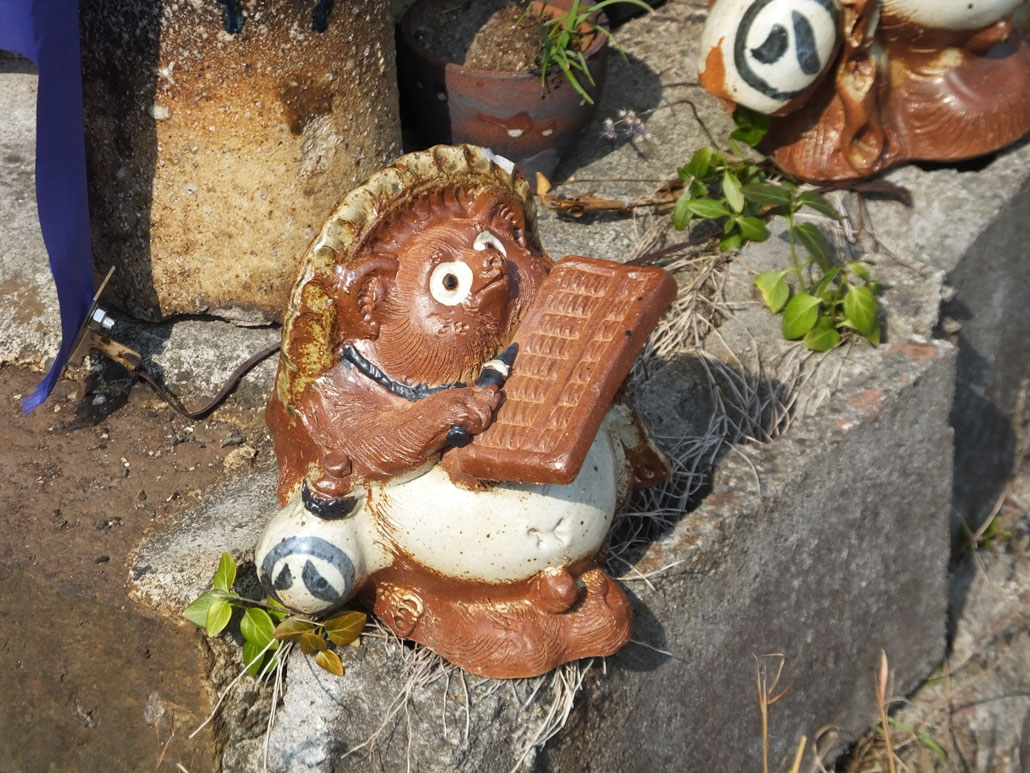 I found Climbing Kiln Cafe on the mountain slope. The kilns were formerly used to fire hibachi (braziers), plant pots, chatsubo (tea urns) and so on. It is interesting that 11 chambers were built in Showa 9 (1934), which had an important meaning. Odd numbers like 11 and 9 cannot be divided by 2, so they were believed to bring people good luck that their pottery won’t be broken either. I heard it is difficult to preserve such climbing kilns perfectly, so Shigaraki Pottery Village’s climbing kilns are quite valuable.

The kilns were combined so that the thermal efficiency increased. When pottery was fired, the heat went up to the adjacent chamber one after another. The reddish or blackish brown of the walls were caused by the heat of the fire. 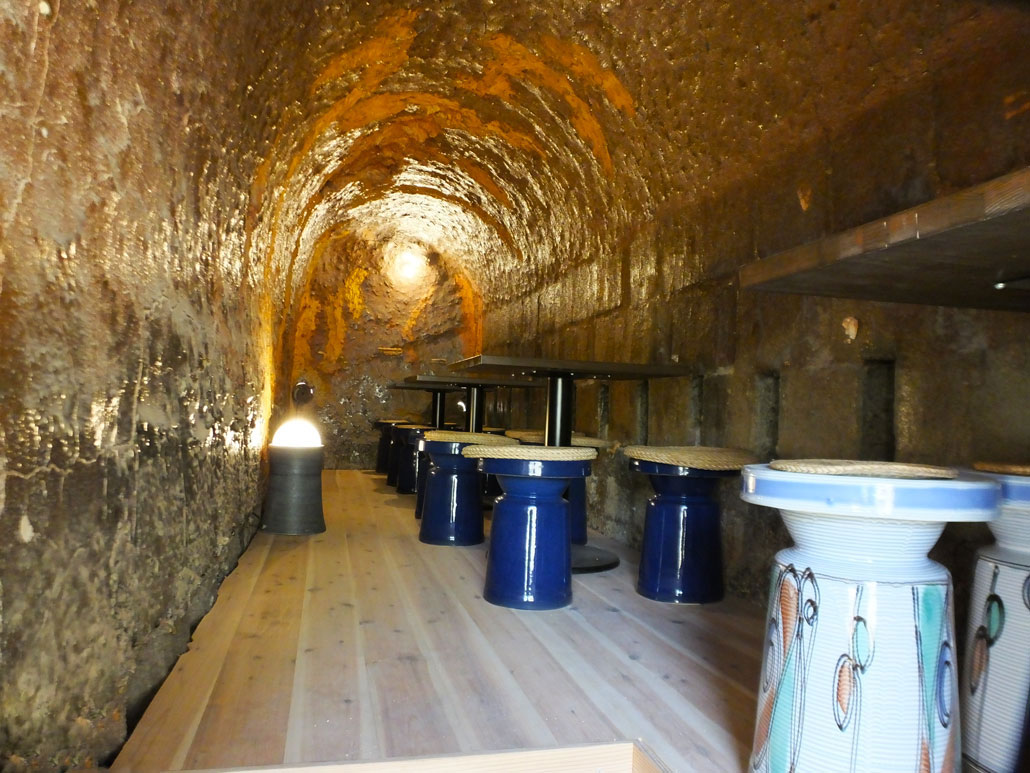 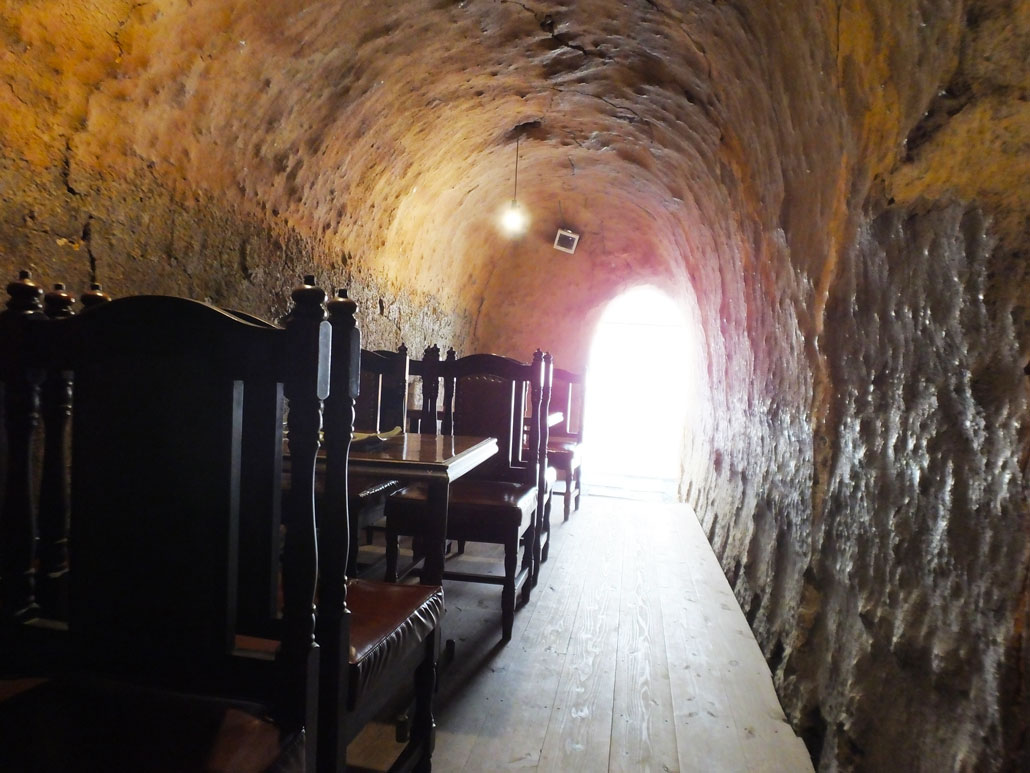 I heard it is hot in the kilns in the summer because there is no air conditioning. When I went there (in March), it was cool outside and it was a little chilly but comfortable inside. I ordered Baumkuchen Cake and coffee though Soft Charcoal Swiss Roll Cake sounded interesting. Baumkuchen Cake is made with fresh milk from Yamada Farm located near there. I could feel the rich flavor of the milk. The plate, coffee cup and spoon are Shigaraki ware (Japanese: Shigaraki-yaki) that is made in Shigaraki.

It was a lot of fun to spend time in a kiln, and moreover, lots of tanuki made me happier. I recommend Climbing Kiln Cafe to both those who are living in Japan and tourists from other countries. If you choose to visit it, be sure to make a reservation beforehand.

Here in Shigaraki Pottery Village, you can make pottery yourself. You can make a cup, a bowl, tanuki pottery and things like that. You can rent a ninja costume and wander around the town wearing it, too. (For pottery making or costume rental, you need to make a reservation at least three days before.) Also, there is a tea shop where you can taste and buy tea leaves produced in Asamiya, Shigaraki. I bought some because the tea is tasty and good for health. As you can see, there are many options to enjoy yourself in Shigaraki Pottery Village! 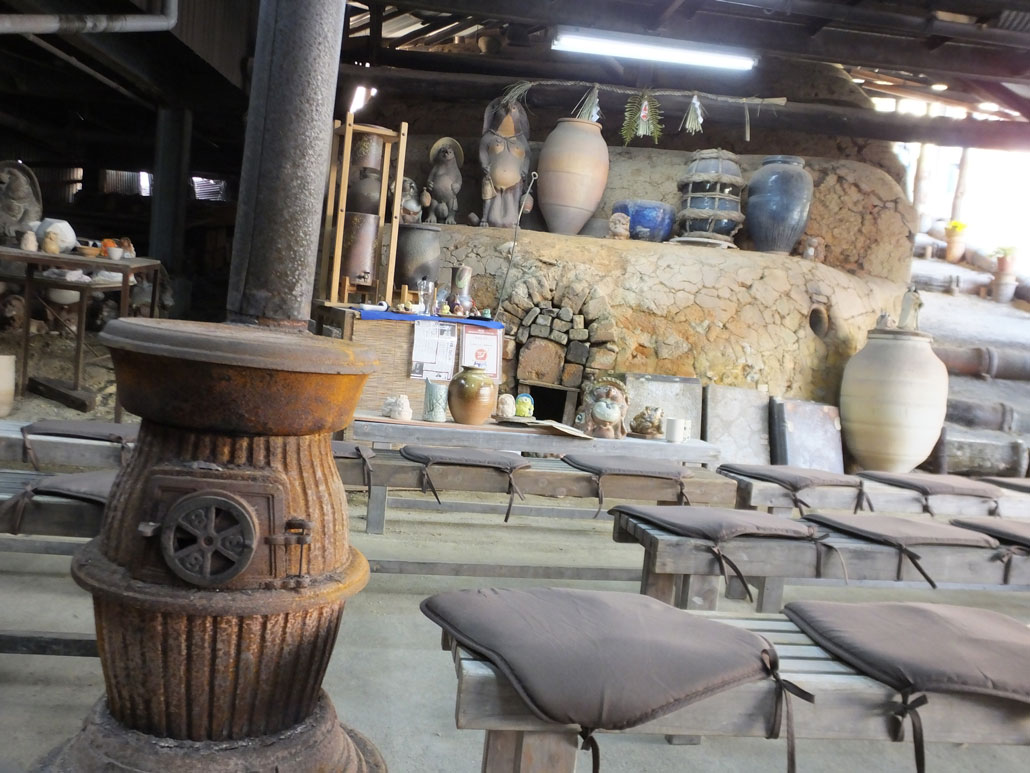 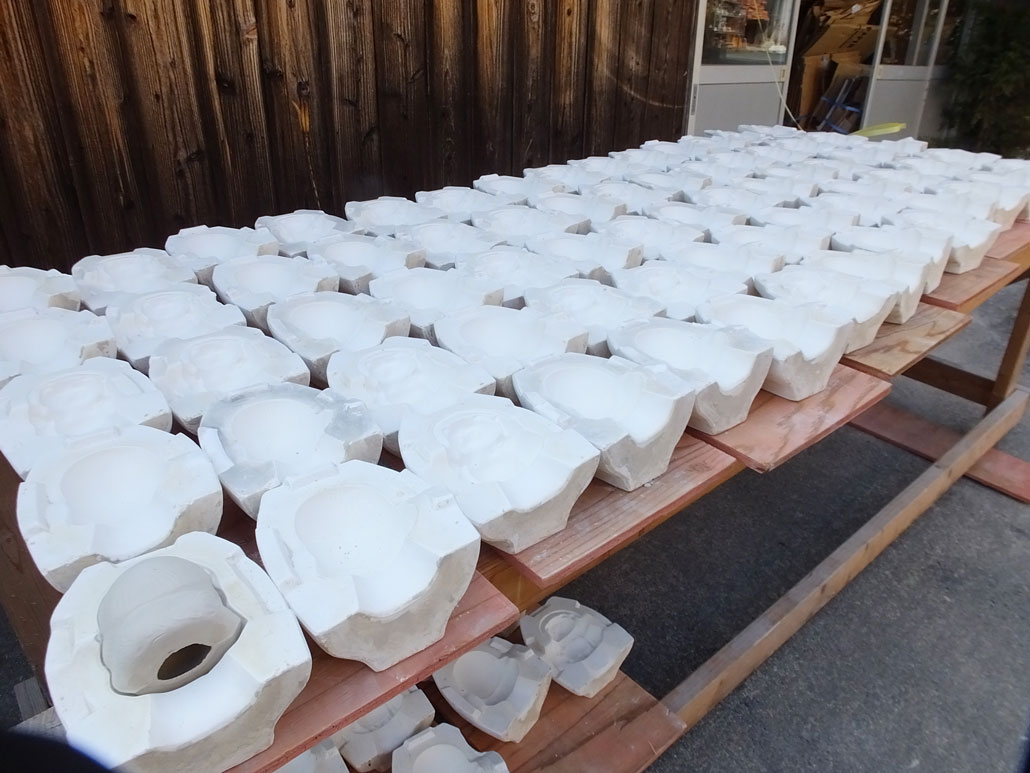 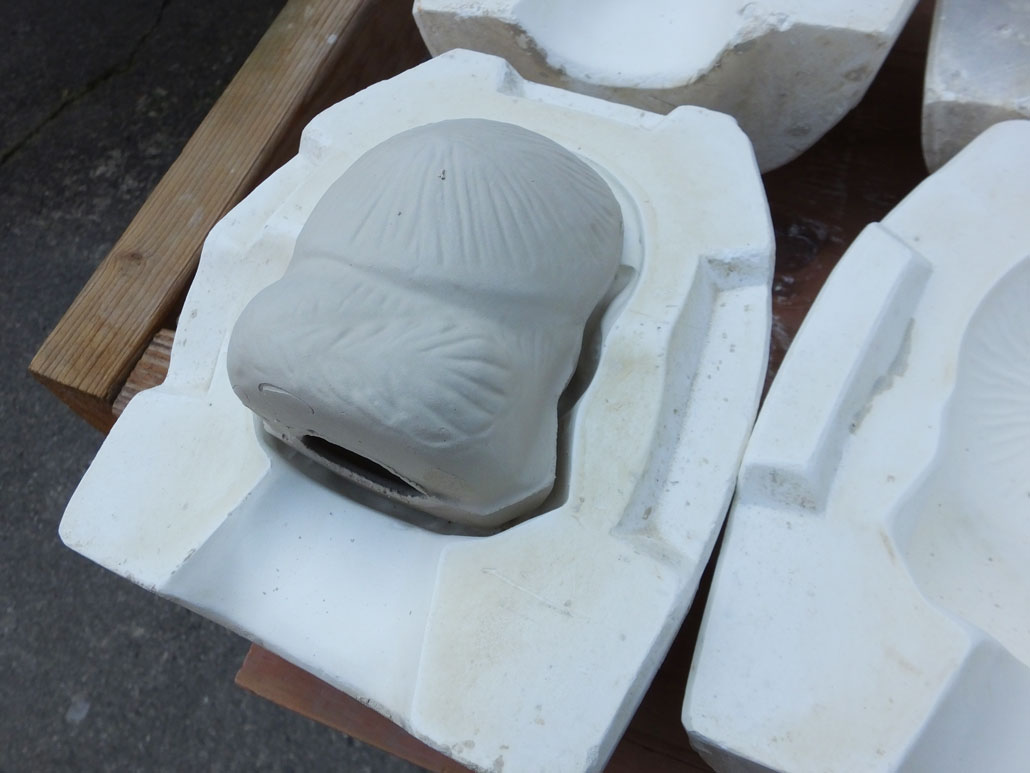 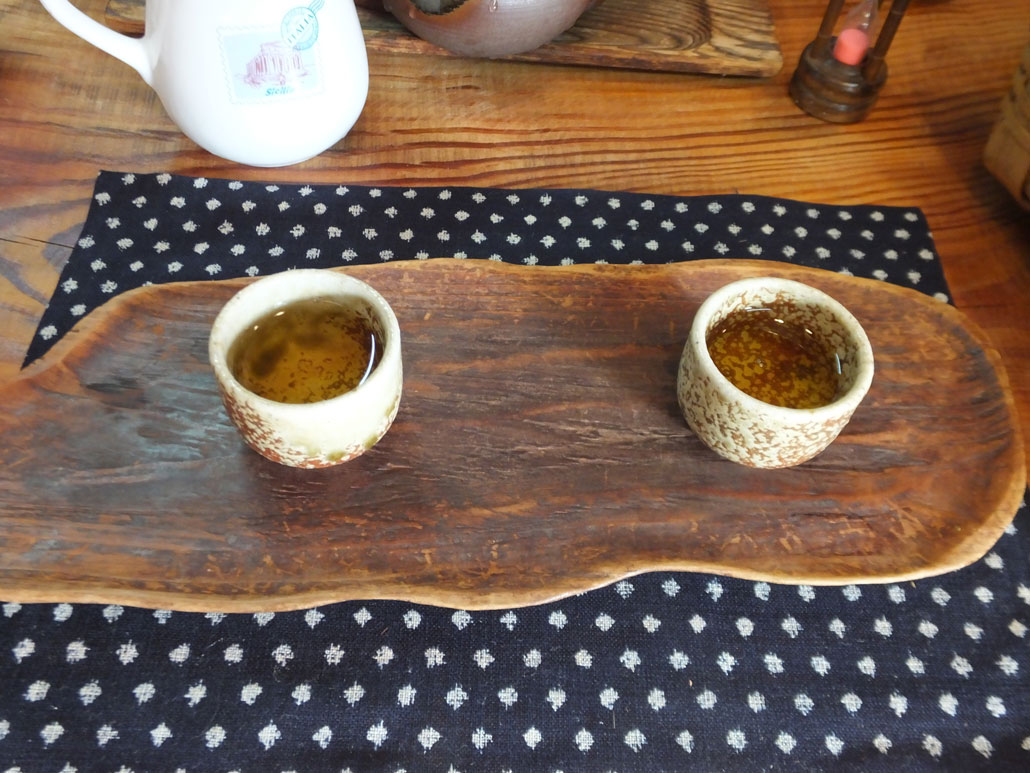